Welcome to Baby TheEnd's third gunpla review, starring... Baby TheEnd, of course [but I'll always be here~]. Reviewer aside, we've got a Wing Gundam Zero Custom [what a mouthful!] HG kit before us here today. I haven't watched all of Gundam Wing, but I do know that Heero is kind of a dick and Wing Gundam transforms into a birdmechplanething. I have, however, seen Gundam Wing: Endless Waltz, which is what the Zero Custom is from [but has lost its transforming abilities]. There are three four versions of the Zero Custom [HG, MG, PG and PG Pearl Coat Ver.] and I'd have to say that the HG is the most manageable of all four. I say this because on all of the other renditions, the large wings have articulated feathers, which seems like it'd be a pain in the ass and kind of unnecessary. But the HG, being only a High Grade, doesn't go that far into articulation [but I'll elaborate more on this later]... 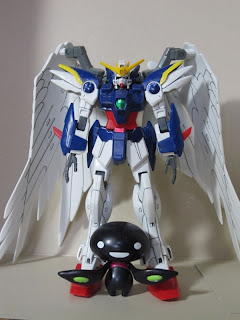 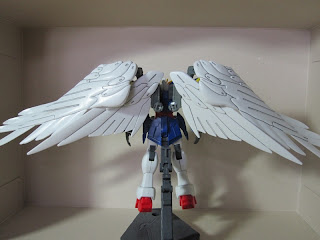 Ah, the glorious Wing Gundam Zero Custom. Let me start out by saying that a little panel lining can really bring out the detail in this HG [that's true about ALL HG kits, no exceptions. I lined Zero Custom a little too heavily though]. Also, Zero Custom is one of the few HG kits I've ever seen that can actually rock the foil stickers. They honestly look nice enough on it that I just don't feel the need to paint those parts instead [except for maybe the blue circles on the shoulder armor and the yellow stripes, which I already did]. 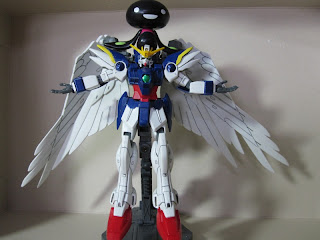 On to posability though! Since Zero Custom is one of the older HG kits, posability isn't fantastic, but it's acceptable. Zero Custom wasn't really made to take awesome battle poses because the focus is on those awesome angel wings it has, so static-ish poses are the way to go with this fella. The feet can't really go anywhere, but I think the point of this kit is to slap it on an action base. The legs have a double-knee system going, which allows for some sweet leg posability. The hip joints can also move around pretty well, only being hindered by the rear skirt armor, which is stationary. 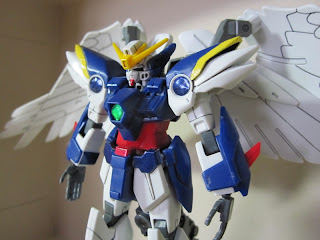 The torso can swivel a little bit, but I'd honestly rather it just not move at all since it looks silly when it's rotated just a little bit. On to the arms, the giant shoulder armor can move around a bit and is attached to the top of the shoulder, so it moves with the arm. The elbow can rotate and bend in the proper direction to about a 90˚ angle, so it can't do anything too dynamic. There are 3 sets of hands that came on the PC [polycap] runner: open hands, fists, and "holding stuff" hands. The head is on a ball joint, but since it's not a PC-to-PC connection the head could be a little loose [it is on mine :( ]. 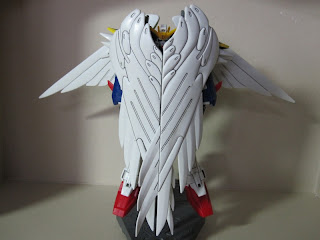 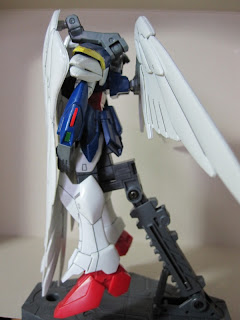 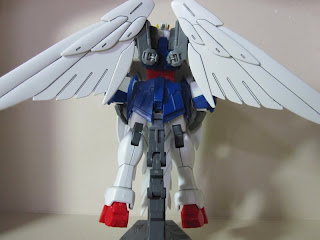 And what would Wing Gundam be without its WINGS? Both sets of wings are on mechanical arms [the larger wings on the larger arms]. You can pretty much put them wherever you want to, but mine are a little loose in the PC connections so they tend to sag a little. Nothing a little dried superglue can't fix though~. Since it's a HG, I strongly recommend panel lining at least the wings, as they stand out so much more than not having panel lining on them. And it looks damn fantastic too! 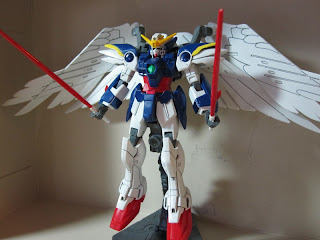 The Wing Gundam Zero Custom comes with 2 weapons, the first being a pair of beam sabers. Out of the box, though, these beam sabers are ALL WHITE. If you intend to use them, it'd be wise to paint them pink/red/whatever so they don't look like large white toothpicks. There isn't any place to store these beam sabers on the Gundam though [probably because the blade is attached to the handle], and I don't remember if Zero Custom even used the beam sabers once in Endless Waltz... 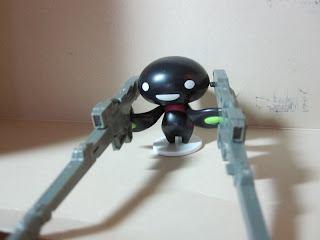 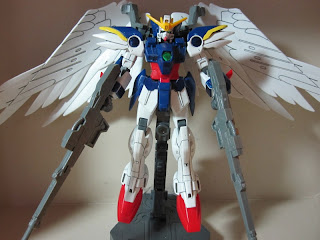 The other weapon is a pair is beam rifles. They're pretty standard grey rifle things that have folding handles for the sole purpose of joining together to recreate the double-rifle-blaster-killer-blower-upper thing from the end of the movie. Since, though, Zero Custom's shoulders can only rotate on the y-axis, Bandai included another body with the arm pegs pointed slightly forward. 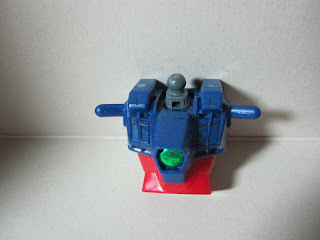 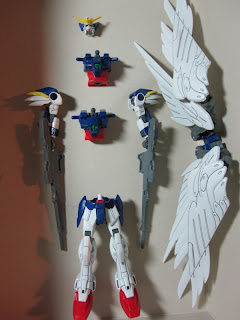 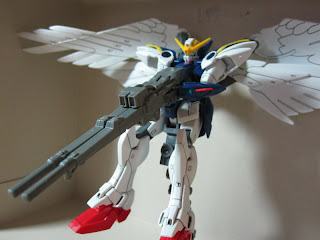 Re-attach the lower body, the head, the wings and the arms and you can pose Zero Custom in the pose it takes when it's trying to shoot through the massive metal barrier with the double-rifle-blaster-killer-blower-upper thing and ends up blowing its arm off [which I'm sure you could recreate as well with some proper weathering effects]. 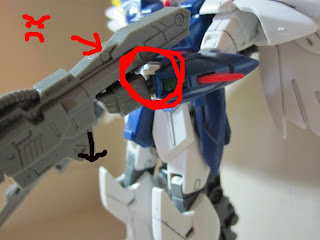 Back to the rifles though, my only complaint is that this kit was modeled in such a way that the Gundam can hold one rifle in each hand, no problem, but the forearm armor forces the rifles to point slightly down >__> Honestly, I think it looks awesome without any armaments and tend to exclude them from any pose I put it into. 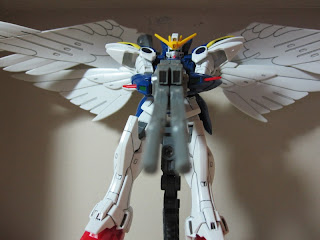 This is a pretty solid HG kit, and while it's not my favorite, it still looks fantastic. A fun fact, I actually bought this [and a Sandrock Custom for my roommate] from someone from /toy/, so thank you to the anon who sold me this kit! If Gundam Wing is your thing, I'd recommend the HG Endless Waltz kits, as it seems they all have their own movie-related gimmicks :D 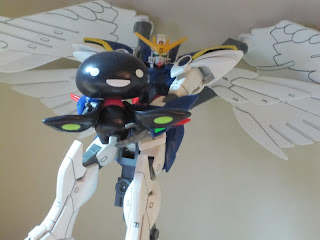 And with that, I will see y'all later~
Posted by Baby TheEnd